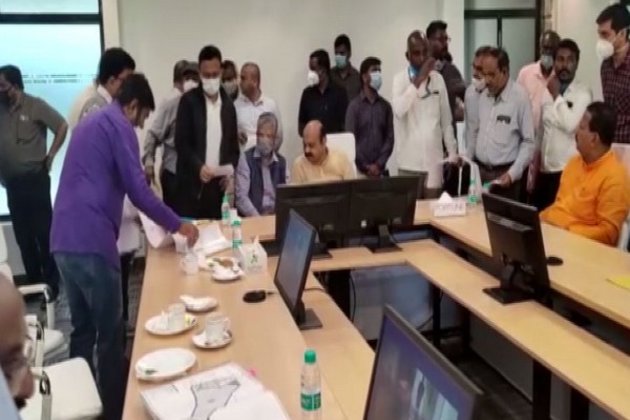 In the meeting, Bommai said, "The research centres have been waterlogged for the past two days due to heavy rainfall. Not only the campus but the laboratories are also filled with water. A huge loss has been occurred due to waterlogging in the labs.""There were two lakes attached to this centre. I suggested the officials to manage the lake water in a proper way because there was overflow in both the lakes during rainfall. The drainage system is also very small here," the chief minister said.

He further said that there is a need for the diversion of the drainage system.

Earlier today, Bommai visited and inspected the flood-affected areas in Bengaluru which includes Kendriya Vihar Apartment and surrounding areas in the city.

After heavy rains, the Yelahanka Lake overflowed and water flooded into Kendriya Vihar and surrounding areas.

Bommai also said that Prime Minister Narendra Modi also called him on Tuesday and took stock of the flood situation that has arisen due to heavy rains in the state.

He updated the Prime Minister with the relief and rescue measures being taken by the State Government. PM Modi also expressed his deep concern over the crop loss and loss of lives due to floods and assured Bommai of the Centre's all necessary cooperation and assistance.

Earlier, the Chief Minister had announced that a sum of Rs 5 lakh would be paid as compensation for completely damaged houses and Rs 3 lakh for partially damaged houses in three instalments. District Collectors have been instructed to disburse the first instalment of Rs 1 lakh immediately.