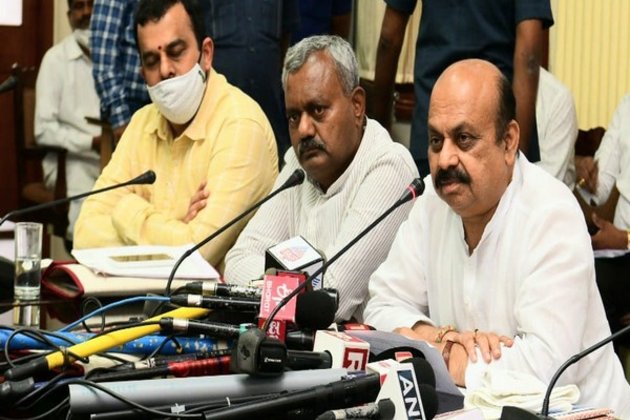 Bengaluru (Karnataka) [India], November 23 (ANI): After taking stock of flood-affected areas in Bengaluru, Karnataka Chief Minister Basavaraj Bommai on Tuesday announced immediate compensation to those people whose houses are either affected or destroyed due to incessant rains and flooding in the Yelahanka area.

Speaking to media persons after his visit to waterlogged Kendriya Vihar Apartment in Yelahanka, Bommai said, "I have ordered the release of Rs 10,000 today itself for those who had to suffer due to water entering their homes. About 400 houses are affected in the Yalahanka area. About 10 km of main roads and 20 km of interior roads are also damaged.

"I have been instructed for preparing the estimates of damage to infrastructure. Funds would be released immediately to take up repair works," the chief minister said.

Bommai also attributed the flooding problem to hurdles for Rajakaluve and said that the work for the widening of 50 km of Rajakaluves had been taken up.

"It had been decided to take up widening of 50 km more. The width of the Rajakaluves needs to be widened from the present 8 to 10 feet to 30 ft. Necessary measures would be taken for the smooth flow of floodwaters in Rajakaluves," he said.

Bommai said that continuous rains in the last three days had filled Yelahanka lake which is overflowing and the floodwater inundated the houses in surrounding areas and the Kendriya Vihar apartment complex.

"Water has submerged the basement of the apartment up to 4 to 5 feet. Local MLA Vishwanath provided food, water and other essential help for the residents who are stuck in their homes," he added.

He further said that a necessary drainage system would be provided for the complex to drain out the floodwaters.

"There are 603 people residing in Kendriya Vihar apartment complex. National Highways Authority would be approached to get the necessary clearance to take up the works as the drains passed under the highway. Then only the problem could be solved permanently," Bommai said.

Pointing out at the source of the flooding problem, Bommai said, "The problem had its source at Yelahanka lake which is connected to 11 more lakes upstream. The heavy rains have led to overflowing from all the lakes to Yelahanka lake which has two narrow Rajakaluves which are choked at many places or being encroached."Earlier, the Chief Minister had announced that a sum of Rs 5 lakh would be paid as compensation for completely damaged houses and Rs 3 lakh for partially damaged houses in three instalments. District Collectors have been instructed to disburse the first instalment of Rs 1 lakh immediately.