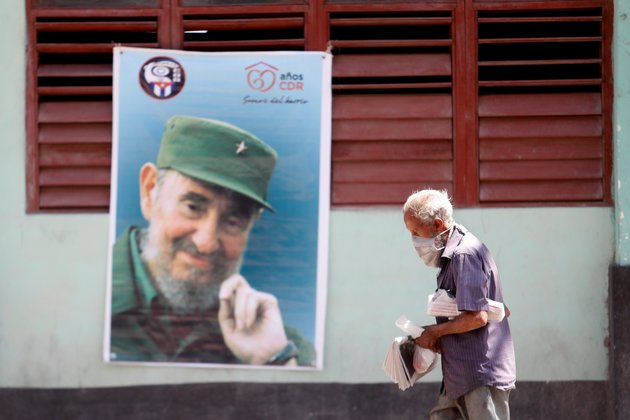 If recent events in Cuba are anything to go by, the government of Miguel Diaz-Canel Bermúdez is facing significant challenges as the country marks five years since the death of its revolutionary leader, Fidel Castro, on November 25 2016.

At least one leading dissident, journalist Guillermo Farinas, was taken into custody ahead of a protest planned for November 15, while, according to some reports, others were placed under house arrest. Yunior Garcia, one of the organisers of the protest - which was shut down by authorities - was placed under house arrest but allowed to leave Cuba for Spain.

It's tempting to view protests - and the idea of constant internal crisis - as the defining feature of contemporary Cuba. But critique and protest have been a part of Cuba's history since independence. And - more importantly - Cubans are taught that it is their revolutionary duty to question and critique constructively.

Debates are not confined to the intelligentsia either - most Cubans have an opinion on how to improve their country. But, on the whole and despite the undeniable hardships that still face the Cuban people, the majority continue to demonstrate a commitment to maintain the system - albeit while working to improve conditions.

The way in which the death of Castro was commemorated in Cuba tells us much about the complexity of Cuban society. The Caravana de la Libertad (Caravan of Freedom) that carried his ashes to the Santa Ifigenia Cemetery in the eastern city of Santiago de Cuba mirrored the route that the triumphant guerrilleros took in early 1959 as they returned to Havana, having ousted the dictator Fulgencio Batista.

In 2016, just as in 1959, Cubans lined the central highway along the length of the island to pay their respects, many of them holding images of Fidel Castro, waving the Cuban flag or displaying the hashtag #Yo soy Fidel (I am Fidel). Some outside commentators interpreted this unusual commemoration as evidence of an authoritarian - or, at least, coercive - system which demands loyalty and obedience. Others noted varying responses from different generations, whose expectations have changed as those with direct memories of pre-revolutionary Cuba have begun to die out.

Those who closely follow Cuban society recognised a complex range of responses and emotions by Cubans of all generations across the island. Some were there to mourn a figure who had improved their lives, others to commemorate the end of a historical period, and yet others to witness a historical moment that captured the world's attention.

From Obama to Trump to Biden

Five years on, that complexity is very much still in evidence, but the context has changed immeasurably and in ways that could not have been anticipated. The rapprochement between Cuba and the US during the Obama administration was reversed - and sent into punitive overdrive - by the raft of 243 sanctions implemented by Donald Trump's administration to restrict Cuba's economic activity. Joe Biden has yet to reverse these sanctions, which have hit Cuba particularly hard in terms of income from tourism - the island's economic mainstay since the collapse of trade with the Soviet Bloc in the early 1990s.

Currency reforms in December 2020 - the Tarea Ordenamiento or "fusion" of the dual currencies that had existed since the 1990s as a response to the end of trade with the Soviet Bloc - brought increased salaries for public sector workers, but led to rising inflation. This, coupled with the restrictions of life under the pandemic and the negative impact of the heightened US embargo, created further economic instabilities, inequalities and precariousness.

Meanwhile Castro's death, the retirement from office of his brother Raúl Castro, and the election of a new generation of leader in the shape of party stalwart Miguel Diaz-Canel Bermúdez in 2019 have created additional unknowns - not least since the "historic generation" that led the revolution in 1959 has all but disappeared.

The impact of COVID

On the face of it, data shows that Cuba has handled the pandemic very well: with just 8.5% of the population infected and 0.73 deaths per thousand in Cuba (compared to 15% and 2.13 respectively in the UK). In addition, figures sourced from the University of Oxford's Our World in Data project shows that Cuba has fully vaccinated 80% of its population. This places the country third in the world behind UAE and Brunei.

But COVID has also created social divisions - largely between those who followed the rules and those who didn't. Early on in the pandemic, debates raged about how Cubans depended on the coleros (queuers). These are people who wait in line for now-precious basic commodities and often re-sell at increased prices. There were criticisms that some of these people were compromising collective pandemic discipline and social equality.

Who decides the nature of change?

It is against this backdrop of political and economic insecurity and COVID restrictions that the protests of July and November must be seen. In effect they are not greatly dissimilar to similar demonstrations in the US, the UK or Europe. But in Cuba these protests have an additional component. There is evidence of clear, sustained and organised interference from organisations in the US.

Since 1959, Cubans have been emphasising that revolution is a constant process, not an event. Current discussions by Cubans of all generations, including the leadership, focus on the revolutionary duty to "change everything that needs to be changed" - a reference to Fidel Castro's 2000 definition of revolution as a constant concept underpinning the Cuban revolution. In this sense, the real issue at stake is the concept of change and who decides to implement it.

In 2021, as in 1959, the key issue is who controls Cuba. Cuba gained its independence in 1898, almost a century after many other Spanish colonies in the Americas. Another century on, and - thanks to US intervention - Cuba's destiny as a sovereign nation - the right to make its own mistakes as well as celebrate its own successes - is still not entirely in its own hands.