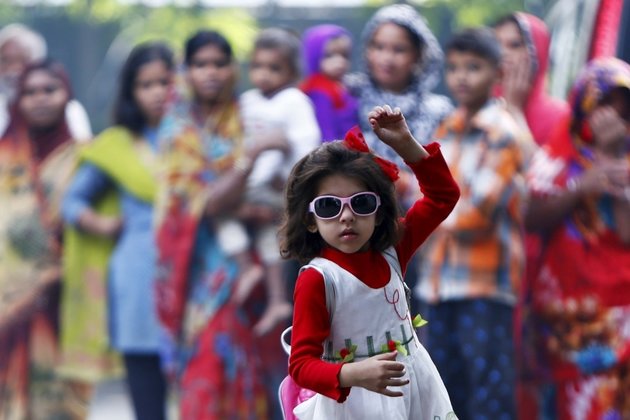 NEW DELHI - India, the world's second most populous country, has reached a key demographic milestone as birth rates drop below replacement level, according to a government survey. That means, although India's population is still on track to overtake China's sometime this decade, its growth has begun to slow.

That is welcome news for a country where a burgeoning population, around 1.38 billion at present, has long been seen as a hinderance to development and a huge strain on resources.

India's National Family Health Survey, released this week, shows the country's 2019 to 2021 fertility rate dropped to 2.0. That is considered a key threshold for declining numbers -- countries where less than 2.1 children are born per woman indicate that a generation is not producing enough children to replace itself and marks the first key step in an eventual reduction in population.

"It's taken the wind out of the misconception that India's population is exploding and we need a two-child norm policy as proposed by some policymakers," says Poonam Muttreja, executive director of the Population Foundation of India. "We are well towards stabilizing our population, so instead of blaming population for our ills, we have to accelerate the gains made and focus on investing in health, education and skills for young people."

Significant progress has been made in recent years to reduce fertility rates, according to researchers, it stood at 2.2 in 2015. They point to declining levels of poverty and improved family health services that helped increase the use of contraceptives in the country, including in its vast rural areas.

Experts says key contributors were an improvement in socio-economic conditions for millions over the last two decades, a higher age of marriage for many women and a shift toward urbanization - the urban fertility rate at 1.6 shows that women living in cities appear to be opting for smaller families.

"It is a very good sign for a populous country like India," said Sanjay Kumar Mohanty, head of population policies at the Mumbai-based International Institute for Population Studies. "It means that we no longer need to make an extra effort to lower the population, except in states where it is still relatively high. It does not need to be a priority concern."

India's rapidly growing population has long posed a challenge - it has increased nearly four times since it gained independence in 1947, when it was home to about 350 million people.

Although three populous northern Indian states, Bihar, Jharkhand, and Uttar Pradesh, and two northeastern states, Meghalaya and Manipur, still have a higher birth rate compared to the rest of the country, they are also making progress, according to public health experts.

"Seven years ago, the government began focusing on high fertility districts in states like Bihar and Uttar Pradesh and worked with women. That really made an impact," says Muttreja. "Also, I think girls and women have become much more aspirational and want to have fewer children. They want to invest in themselves and the children. The key going ahead will be women's education because that is undoubtedly the best contraceptive pill."

India has run a voluntary family welfare program for decades, but coercive methods aimed at curbing the population were used briefly in the 1970s when Prime Minister Indira Gandhi's government carried out a controversial mass sterilization program.

In recent years, demographics have emerged as a polarizing issue with Hindu groups pointing to a higher birth rate among Muslims, the country's largest minority.

Earlier this year, India's largest states, Uttar Pradesh and Assam, both ruled by the Hindu nationalist Bharatiya Janata Party, unveiled controversial bills for curbing population growth. The proposed legislation would deny government jobs, promotions, subsidies and the right to contest local elections to anyone who has more than two children. Other states ruled by the BJP have said they were also mulling similar legislation to push for smaller families.

In an editorial, the Indian Express newspaper said the survey's recent findings "were a resounding repudiation of politicians and policymakers who have, of late, been crying hoarse about population explosion."

There were some other positive results. India, where a deep-seated preference for boys has skewed the gender ratio at birth and led to concerns about its "missing girls," now has 929 girls born for 1000 boys, up marginally from 919 five years ago.

The United Nations has forecast that India will edge past China by 2027, but if the lowered fertility rates persist, the date when India will become the world's most populous nation could be delayed, according to demographers.