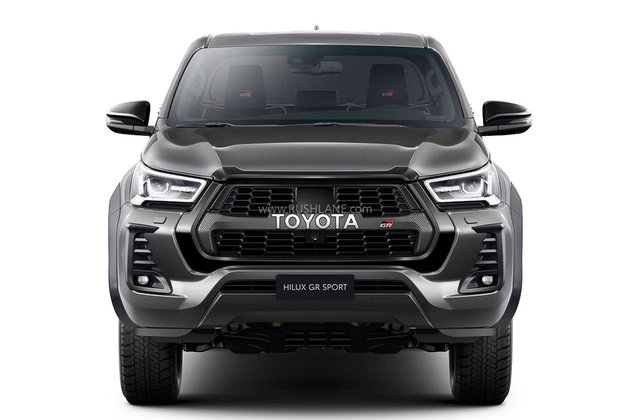 Toyota Hilux is one of the most popular pickup trucks in global markets currently. While the pickup truck market might not be strong in India, in some overseas markets, pickup trucks are a rage. Many contemporary pickup trucks take part in various challenging rallies across the world like the Dakar rally, Hilux being one of them.

The Japanese carmaker has now unveiled a sportier iteration of Hilux in the form of a top-spec GR Sport Edition. The GR Sport Edition of Hilux is said to have been inspired by the brand's success at the Dakar Rally. This special trim features a number of exterior and interior design updates in addition to some new features and functional upgrades.

Starting with its exterior, GR Sport Edition of Hilux gets a new front bumper that houses larger side air intakes along with new and larger fog lamp enclosures. A completely dark exterior theme accentuates its sporty appeal. Gloss black trims all around the body and a body-coloured skid plate are some other notable updates.

The brawny pickup truck rides on 17-inch alloy wheels with a black and machine finish which are shod with all-terrain tyres. Further, GR Sport logos have been slapped on the front grille and tailgate to distinguish itself from rest of the lineup. Other notable highlights include blacked-out door mirror casings, side steps, tailgate handle and plastic fender extenders.

The all-black theme of the exterior has been carried inside the cabin as well featuring black leather upholstery with synthetic suede. Contrast red stitching adds sportiness to the cabin. Carbon fibre inserts on dashboard and centre console lend a touch of premium appeal while a red deco line across the width of the instrument panel takes aesthetics up a notch.

Being a GR Sport Edition, it features GR SPORT branding on the seatbacks, carpet mats, starter button and information display animation graphic. Other special highlights inside the cabin include aluminium pedals, blue door panel illumination and paddle behind the steering wheel for manual gear shifts. The cabin is loaded with creature comforts such as a JBL sound system, navigation, heated front and rear seats and more.

Other than visual amendments, Toyota has also made some functional upgrades in this GR Sport Edition of Hilux. This includes adjustments to the suspension setup which involves strengthening of coil spring at front with monotube shock absorbers. The rear end retains the traditional leaf-spring configuration. These upgrades result in better damping, better straight-line performance and handling and increased grip.

No updates have been made to the powertrain. The pickup truck draws power from the same 2.8-litre diesel engine which kicks out 201 bhp and 500 Nm of peak torque. The oil burner is mated to a 6-speed automatic transmission which sends power to all four wheels via a 4WD system with a low-range transfer case. Off-roading prowess is further enhanced by the provision of an automated limited-slip differential.