How China Built An 'Inadvertent Empire' In Central Asia 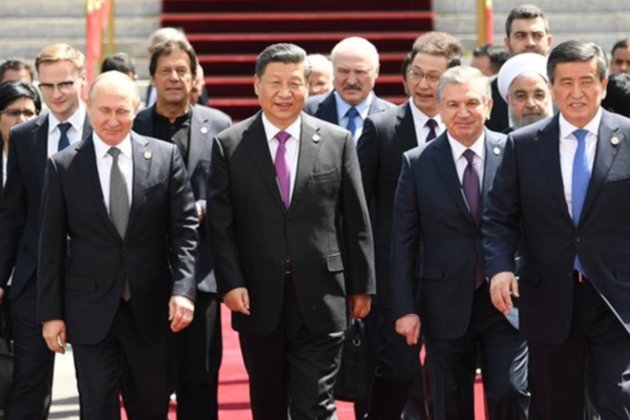 The release of Sinostan, a new book about China's growing influence in Central Asia, will mark the end of a sprawling journey that has taken its authors more than a decade to complete.

When Raffaello Pantucci and Alexandros Petersen first set out in 2008 to research Beijing's rising and outsized impact on the region it was only slightly visible, but it has since become one of the most noteworthy examples of China's global sway.

Amid little fanfare in 2001, Beijing made its first major foray into the region when it launched the Shanghai Cooperation Organization (SCO), a regional bloc that included Russia and every former Soviet Central Asian country except for Turkmenistan.

That pivot to Eurasia expanded in the coming years as China's growing economic gravitas turned it into Central Asia's largest trading partner and Beijing built a sprawling network of oil and gas pipelines across the region.

Things accelerated in 2013, when Chinese President Xi Jinping chose the Kazakh capital, Astana (since renamed Nur-Sultan), to unveil the Silk Road Economic Belt, the overland component of the multibillion-dollar infrastructure project that would become the Belt and Road Initiative (BRI) -- a hallmark of Xi's foreign policy.

For the British and American analysts, it was further proof that years of on-the-ground research in Central Asia and China was set to pay off. While juggling PhD programs and various roles at think tanks around the world, the duo had been working on a project that they would turn into a book meant to understand and explain how Beijing had created an 'inadvertent empire' in Central Asia.

It was clear to them that the region was becoming increasingly attached economically and politically to China, but also that it was happening in an organic way, with little central direction or a clear plan from Beijing for how to wield this newfound influence.

SEE ALSO: How China Became A Force In The Former Soviet Space After The Fall Of The U.S.S.R.

'The 'inadvertent empire' idea was born out of the fact that when we looked on the ground, we could see that China was the most consequential player,' Pantucci told RFE/RL, 'but it was equally clear that there wasn't anyone in Beijing that had a strategic vision.'

But just as their project gained new momentum and a finish line for the book appeared on the horizon, tragedy struck in 2014.

Petersen, who had taken a new position at the American University of Afghanistan, was killed in a Kabul restaurant bombing by the Taliban that left 20 others dead.

In the aftermath of the attack, the book was put on hold and, over the years, life caught up with Pantucci: marriage, children, and new jobs took him down other research paths, until he finished the book amid the pandemic -- giving a long overdue tribute to his slain friend.

'For me, it's great to finally have it out there because it's a testament to him as much as it is a subject that I devoted a period of my life to,' Pantucci said. 'It feels like I'm finally closing out a chapter in my life.'

A lot has happened in Central Asia since 2014.

The SCO has since expanded, Chinese businesses have flocked into the region, Beijing has cautiously established a security footprint in Tajikistan, and the expansion of the BRI has seen China become more embedded in the everyday fabric of the region.

Chinese policies have also continued to shape the region.

A brutal crackdown launched in 2017 in Xinjiang, the western Chinese province that borders the region, swept more than 1 million Uyghurs, Kazakhs, and other Muslim minorities into detention camps and prisons. The United States' chaotic withdrawal and the Taliban's takeover of Afghanistan in August 2021 has also opened up new opportunities for Chinese influence across the region.

Likewise, Beijing's relationship with Moscow has transformed -- a process that culminated in February when Xi and Russian President Vladimir Putin unveiled a massive strategic document that they said heralded a new era for a 'no limits' partnership.

But throughout all the changes, Pantucci and Petersen's original thesis that Chinese influence in Central Asia was marked by an awkward indifference continued to hold. 'The massive economic connections, its geographic proximity, and the overlapping domestic concerns all mean that China is a major player, but it's one that is disinterested in the wider problems for the region and instead decides to narrowly focus on its own,' Pantucci said.

Xinjiang, which is historically part of Central Asia and was only officially incorporated into China in 1949, has long been integral to Beijing's designs on the region and has been the focus of Chinese concerns over Islamic extremism, which the government used to justify its camp system and crackdown that has drawn worldwide condemnation.

SEE ALSO: China In Eurasia Briefing: Is The World Giving Beijing A Pass Over Xinjiang?

Chinese policymakers see Central Asia as strategic to its own security. Beijing's Develop the West strategy, which was designed to improve economic conditions and development in Xinjiang, also included bringing stability to the province's neighbors.

This has been a welcome financial boon for Central Asian leaders, whose national budgets pale in comparison to individual Chinese provinces and understanding this imbalance is at the heart of the 'inadvertent empire' that Sinostan explores.

On the one hand, Pantucci and Petersen argue that Central Asia has functioned as a type of laboratory for China, where 'you can see an outline of what China's future foreign policy is going to look like and get a feel for how China is going to manage some of the problems with which it is confronted.'

But at the same time, Pantucci said, China has little interest in the bigger picture in Central Asia and perhaps even less in inserting itself into solving the region's economic or political problems.

'China is one of the world's largest economies and it is next-door, which just naturally means it will have huge influence over Central Asia,' he said. 'But it is also not a priority for the Chinese leadership in a big way at all.'

This dynamic raises many questions for the future of the region, especially in the aftermath of Russia's February 24 invasion of Ukraine.

As Russia's January military intervention in Kazakhstan highlighted, Moscow is still the main external security guarantor for Central Asia and China has shown little ambition to supplant it. The war in Ukraine, however, could further accelerate China's influence and limit Russia's.

Central Asian governments, such as Kazakhstan and Uzbekistan, have expressed concern and dismay over Moscow's invasion and violation of Ukrainian sovereignty, while the economic hit of Western sanctions on Russia, coupled with the losses and strategic missteps that its military has encountered, could also further curb its appeal as a partner.

Frontier-defense troops of China and Tajikistan conduct a joint patrol along the Chinese-Tajik border in 2017.

In one respect, this sets the stage for Chinese economic and political influence to grow, but with instability still bubbling under the surface across Central Asia, one concern is how much Ukraine will distract Russia from other areas and if it will be able to insert itself as vigorously as it traditionally has done.

'The story of China's increased influence will only [grow] now,' Pantucci said. 'But one main question is what happens when problems erupt. I don't know if China would be willing to step up to fix things.'

After Biden tapped US oil reserves, House passes bill to end such uses

WASHINGTON D.C.: The US House of Representatives has passed a bill that limits the ability of US Energy Secretary Jennifer ...

BOSTON, Massachusetts: Russian businessman Vladislav Klyushin, who has ties to the Kremlin, has been accused of making tens of millions ...

TOKYO, Japan: In light of a tense security environment following Russia's invasion of Ukraine and Moscow's growing military cooperation with ...

DALLAS, Texas: Oil and gas pipeline operators are preparing to stockpile equipment following severe weather forecasts for the next few ...

TikTok CEO to appear before US Congress to discuss security concerns

WASHINGTON D.C.: As US lawmakers investigate the Chinese-owned video-sharing app TikTok, its Chief Executive, Shou Zi Chew, has confirmed that ...

TEHRAN, Iran: A gunman this week stormed the Azerbaijan Embassy in the Iranian capital, Tehran, and killed its security chief ...

TOKYO, Japan: Toyota has announced that it sold 10.5 million vehicles in 2022, maintaining its position as the world's top-selling ...

TOKYO, Japan: After struggling for years to promote its products amid protests from conservationists, Japanese whaling company Kyodo Senpaku announced ...

NEW DELHI, India: Marking a year since the Tata Group took control of Air India, the former state-run carrier has ...

SEOUL, South Korea: South Korean officials have said that the government will double energy vouchers and provide discounts on gas ...