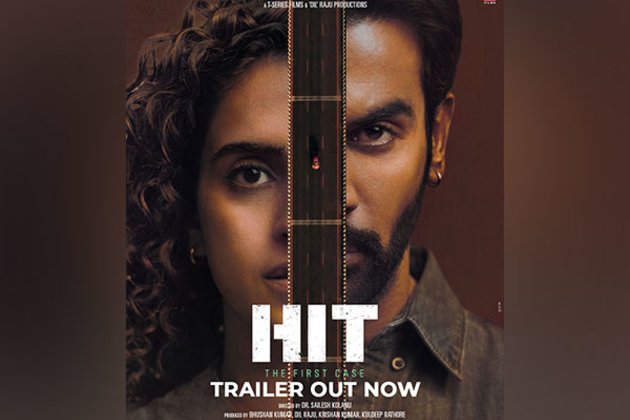 Mumbai (Maharashtra) [India], June 23 (ANI): The trailer of Rajkummar Rao's much-awaited film 'Hit - The First Case' is finally out!The trailer that has left fans in awe of the actor's brilliance, starts with a girl getting abducted. Rajkummar Rao is seen in an intense avatar playing a cop.

Looking sharp, Rajkummar is seen trying to resolve the case of the missing girl as he deals with trauma. Sanya Malhotra is Rajkummar's love interest in the film.

Full of thrill and suspense, the trailer is being lauded by fans who are waiting with their bated breaths to unfold the mystery that this movie has to offer.

'Hit - The First Case' will hit the screens on July 15. Directed by Sailesh Kolanu, the upcoming thriller is the Hindi remake of the Telugu film of the same name. The film is set to hit the theatres on July 15 and is produced by Bhushan Kumar, Dil Raju, Krishan Kumar, and Kuldeep Rathore.

Apart from 'Hit-the first case', Rajkummar will be seen in a bunch of movies. He is shooting for 'Mr And Mrs Mahi' opposite Janhvi Kapoor. The film is helmed by 'Gunjan Saxena: The Kargil Girl' director Sharan Sharma.