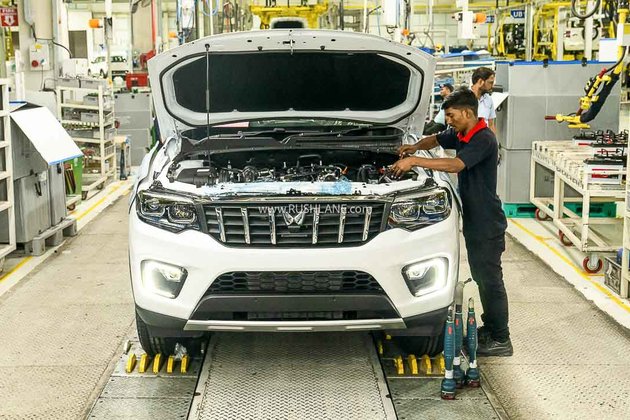 Mahindra Scorpio N is off to a flying start. It has become the fastest SUV to reach 1 lakh bookings. It took Mahindra just 30 minutes to create this record. The new Scorpio is priced very close to XUV700. Will this factor affect the sales numbers of XUV700? After all, India is a price-sensitive market. But pricing aside, what do both these SUVs offer? Let's find that out first.

XUV700 is built around a monocoque chassis which is modern in terms of construction. It is primarily FWD (Front Wheel Drive) but also has AWD options. XUV700 is agile, quick and also frugal. Scorpio-N, however, is built on a traditional and old-school ladder-frame chassis with RWD (Rear Wheel Drive) and 4WD options. Don't scoff on ladder-frame just yet. Even the Toyota Land Cruiser LC300, which has a reputation of running forever, has a ladder-frame chassis.

Scorpio-N is tougher and can take beaten paths like a champ but is subjected to body roll and bounciness. XUV700 is lower to the ground as it is monocoque, hence it is suitable for families with elderly. Both SUVs have their strengths and weaknesses. But to sum them up, XUV700 is more for urban dwellers while Scorpio-N is for more spiritual ones (not godly spirits). Also, XUV700 gives out some MPV vibes. But Scorpio-N? Nope.

XUV700 is 33 mm longer than Scorpio-N but where the latter blows punches are width and height. Scorpio-N is 27 mm wider and is a whopping 115 mm taller than the XUV700 owing to its ladder-frame construction. In terms of engines, both get the same set of engines, but with different tuning.

XUV700 is loaded with gizmos such as a 10.25-inch touchscreen infotainment display, a 10.25-inch digital instrument console, dual-zone climate control, wireless Android Auto and Apple CarPlay, AdrenoX connected car tech, 360-degree camera with blind view monitoring, and more. Other features include ABS with EBD, six airbags, cornering lamps, cruise control, a panoramic sunroof, and smart door handles to name a few. Mahindra Scorpio-N is feature rich too. But not as rich as XUV700. It lacks the panache of XUV700 and makes up with butchness. It lacks a panoramic sunroof, the fancy dual 10" screens, smart door handles and more. But it is also priced accordingly.

Now we come to the 4WD variants pricing and the tables turn completely in Scorpio-N's favour as it offers 4WD with lower Z4 variant unlike XUV700 that only gets it on top AX7 variants. Also, Scorpio-N offers 4WD with both manual and automatic transmissions whereas, on XUV700, it is only offered with AT. Cheapest 4WD variant costs Rs. 16.44 lakh with Scorpio-N while it costs Rs. 22.98 lakh with XUV700 marking a huge gap. (All prices ex-sh)

We should state that Scorpio-N prices mentioned above, are introductory. Which were valid only for the first 25,000 bookings. All-in-all, we will conclude this comparo in Jeremy Clarkson style, okay? XUV700 is brilliant. But we like the Scorpio-N more.