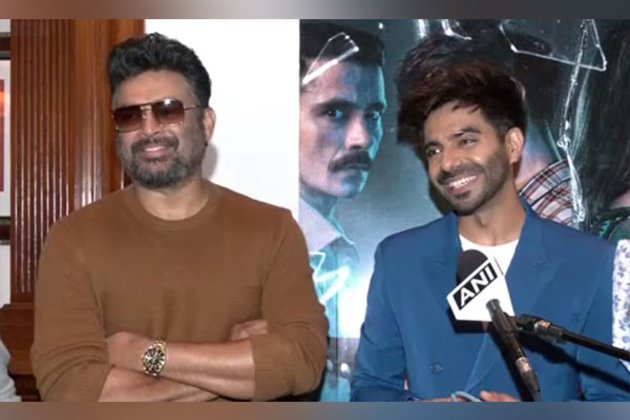 New Delhi [India], September 21 (ANI): Actor Aparshakti Khurana enjoy the love of many and his acting skills have garnered him much deserved appreciation and praises. The actor will next be seen sharing screen space with R Madhavan in the upcoming film 'Dhokha'.

On Wednesday, while seeking to ANI, Aparshakti revealed how Madhavan has in many ways inspired him. When asked about what he loved about Madhavan, he said, "We all knew the professional journey of Maddy Sir...jo personal inki journey hai about him and his family, and about him putting everything together for his son to become a pro swimmer...its beautiful! Now that I'm also a father there's so much to learn"Helmed by Kookie Gulati, 'Dhokha' is touted as a multi-perspective pacy film based on an urban couple and promises to take the audience through the whirlwind journey during a day in the life of the couple.

Talking about his role, Aparshakti had earlier shared, "Attempting a genre that I have never done before is certainly a challenge, but it is something that I have been wanted to do for a very long time."Aparshakti will be seen portraying a Kashmiri man - Haq Gul.

Apart from Aparshakti and Madhavan, the film also has Darshan Kumaar and Khushalii Kumar in lead roles.

'Dhokha' will mark the debut of Khushalii Kumar.

Khushalii is the daughter of the music legend and the founder of the T-series Gulshan Kumar, she made her debut as a singer in the year 2015.

Talking about the film, 'Dhokha' is produced by Bhushan Kumar, Krishan Kumar, Dharmendra Sharma and Vikrant Sharma. It is all set to hit theatres on September 23. (ANI)