Remember Anand's climax? Big B did that in real life for Raju Srivastav 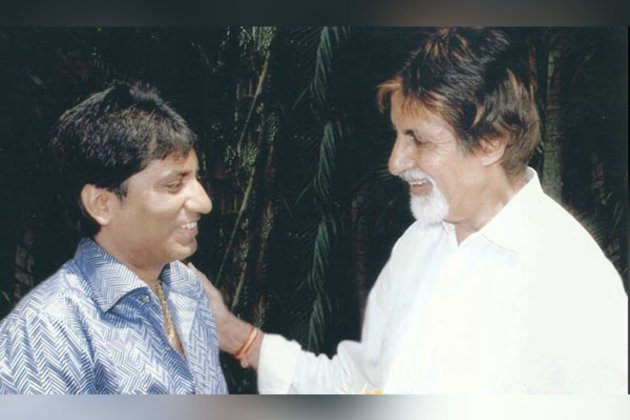 New Delhi [India], September 23 (ANI): Anand, the iconic movie released in 1971, was the story of a terminally ill man, played by Rajesh Khanna, who wished to live life to the fullest. As he passes away on his deathbed, his doctor, played by Amitabh Bachchan, exhorts him to wake up to life. And, almost five decades later, Bachchan, brought that reel moment into reality for late comedian Raju Srivastav.

As Srivastav was an ardent fan of Bachchan and used to mimic him, the megastar in his blog revealed he was asked to send a voice note to awaken the late comedian while he was being treated at the AIIMS. However, he did not mention the name of the comedian in the blog.

"Another colleague friend and creative artist leaves us .. a sudden ailment and gone before time .. before his creativity time completion .. each day in the morning with him in spirit and information from near ones ..they got advised to send a voice to awaken his condition .. i did .. they played it for him in his state in his ears .. on one instance he did open his eye a bit .. and then .. went away ..his sense of timing and the colloquial humour of his birth shall remain with us .. it was unique, open frank and filled with humour .. he smiles from the Heavens now and will be the reason for mirth with the God's," Bachchan wrote.

Srivastav, 58, breathed his last on Wednesday. He had been on life support ever since he was admitted to the All Indian Institute of Medical Sciences (AIIMS) on August 10 following a heart attack.

The comedian was in the entertainment industry since the 1980s and shot to fame after participating in the first season of the reality stand-up comedy show 'The Great Indian Laughter Challenge' in 2005.

In one of the interviews, Srivastav had said, "I became a fan of mimicry and comedy when I saw Amitabh Bachchan's Deewar. I became his fan to the extent that I used to get his posters and put them at my house. I dotted his hairstyle and started imitating him. People used to address me as Big B."Srivastav is survived by his wife and two children. (ANI)