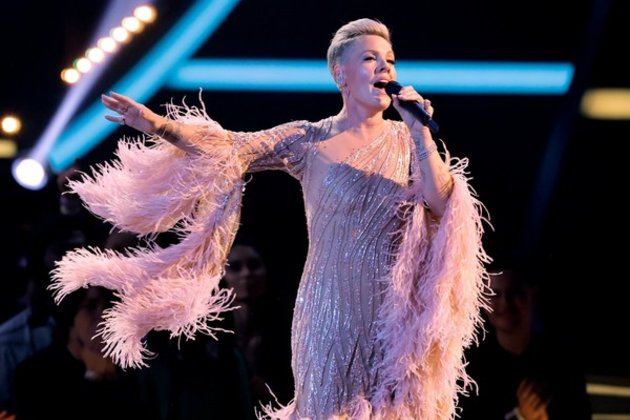 As per The Hollywood Reporter, the 'Just Like Fire' singer took to the stage to belt out 'Hopelessly Devoted To You', the iconic number from the musical film 'Grease'.

The performance was a tribute to the late actress Olivia Newton-John, who originally sang that song in the film.

Clad in a glimmering pink dress covered with ruffling feathers, Pink crooned through the evergreen ballad with pictures of the late actress flashing through the screen behind her.

The performance was simple, but heart-warming, as fans swayed their arms behind her as she performed.

This was Pink's second performance of the ceremony.

According to The Hollywood Reporter, Pink first performed her latest single 'Never Gonna Not Dance Again' in roller skates.

In her illustrious career, she achieved five No. 1 hits at the Hot 100 music chart.

'Hopelessly Devoted To You' had charted at No. 3. It was one of the three hit songs from the soundtrack of 'Grease', as per The Hollywood Reporter.

Talking of her awards, the 'Xanadu' singer had ten AMAs in her kitty. Her first win was for the album 'Let Me Be There' in 1974.

She had swept up all the awards in the 'favourite female artist' categories throughout the 70s.

The 'Two of a Kind' actress had won in the pop/rock category for three years back-to-back, as per The Hollywood Reporter.

On the other hand, Pink has been nominated eight times for the AMAs. (ANI)