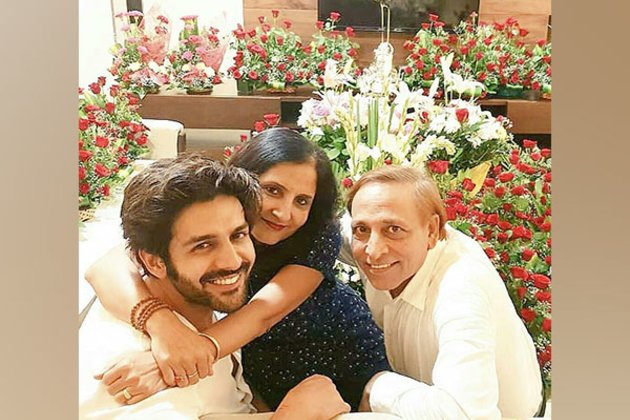 Mumbai (Maharashtra) [India], November 22 (ANI): Bollywood actor Kartik Aaryan, in the early hours of Tuesday, shared a glimpse from the surprise birthday party he got from his family.

Taking to Instagram, Kartik shared a couple of pictures which he captioned, "In every birth, i would like to be born as your koki. Thank you for the sweet birthday surprise mummy- papa, Katori n Kik."https://www.instagram.com/p/ClPEaNeN8nK/In the first picture, Kartik could be seen sitting on a couch along with his cute little pet dog Katori and cutting his huge chocolate birthday cake.

In the next picture, the 'Dhamaka' actor could be seen posing with his parents and his dog in his hands.

Soon after Kartik shared these adorable pictures, fans swamped the comment section and dropped red heart emoticons and birthday wishes for the actor.

Actor Ayushmann Khurrana wrote, "Happy birthday KA!."Actor Kriti Sanon wrote, "Happiesttt Birthday Buntoooo i have the besttt gift for u.. stay tuned!.""May you get all the happiness in the world," a fan commented.

Meanwhile, on the work front, Kartik is currently shooting for his next musical romantic saga film 'Satyaprem Ki Katha' along with Kiara Advani.

Helmed by Sameer Vidhwans, the film is all set to hit the theatres on June 29, 2023.

Apart from that, he will also be seen in producer Ekta Kapoor's next romantic thriller film 'Freddy' alongside Alaya F, which is all set to stream exclusively on the OTT platform Disney Hotstar from December 2, 2022.

He also has director Rohit Dhawan's 'Shehzada' alongside Kriti Sanon and Anurag Basu's next 'Aashiqui 3' in his kitty. (ANI)