Analysis: Should Ukraine Negotiate with Russia 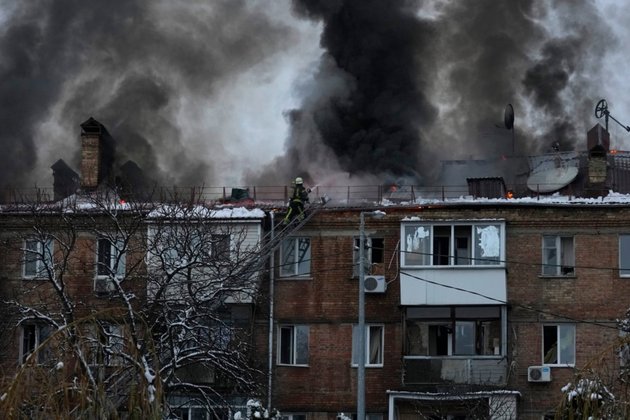 Ukrainian officials are pushing back against growing pressure to enter negotiations with Moscow even as relentless Russian airstrikes take a mounting toll on Ukrainian lives, wealth and infrastructure.

Mykhailo Podolyak, adviser to the Office of the President of Ukraine, dismissed Russian signals of a readiness for talks as simply part of an influence campaign to undermine support for Ukraine among its partners.

'We expect our partners to stop paying attention to Russia's provocative statements regarding the negotiation process,' Podolyak said in an interview Friday with VOA, speaking from Kyiv.

Laying out what he described as 'four core elements of consensus' in the U.S. government, Sullivan reiterated that only Ukraine could decide when and on what terms to negotiate. He added that any just peace must be based on the principles of sovereignty and territorial integrity, and that the U.S. will do all it can to make sure that in any future talks, Ukraine will be able to negotiate from a position of strength.

Nevertheless, Moscow's state representatives have been increasingly speaking about their openness to negotiations in the wake of Russia's withdrawal from Kherson - their country's third major reversal of the war.

Deputy Foreign Minister Sergei Ryabkov said this month that his government is 'open to dialogue, without preconditions,' Russian mass media reported. He was quoted as saying that Moscow had been ready to engage in negotiations earlier, but that Kyiv had interrupted the dialogue 'at the command of its Western curators.'

Four days after Ryabkov's remarks, Russian began its heaviest shelling of Ukrainian territory since its invasion in February. On November 15, up to 100 missiles and drones were launched, leaving almost half of Ukraine's energy system disabled. Another massive attack on Wednesday further crippled the energy infrastructure in Kyiv and other Ukrainian cities.

The shelling on November 15 came just hours after Ukrainian President Volodymyr Zelenskyy presented a 10-point 'Ukrainian peace formula' to the G-20 summit in Bali, Indonesia. It included measures to ensure radiation and nuclear safety, food and energy security, an exchange of prisoners and the return of the deported Ukrainians from Russia, restoration of Ukraine's territorial integrity and prosecution of war crimes.

Dmitry Peskov, press secretary to Russian President Vladimir Putin, told Russian reporters that the shelling - which left millions of Ukrainians without heat, water or electricity, at least for hours at a time - was due to Ukrainian authorities' refusal to negotiate.

Podolyak told VOA that Peskov's statement was 'the type of ultimatum that terrorists would issue: Either I kill the hostages - the civilian population of Ukraine - or you do what we say.'

He believes Russia developed the negotiation narrative to improve its reputation worldwide.

'For them, the word 'negotiations' does not mean the same as for you and me - sitting down, presenting positions and looking for a compromise,' Podolyak said. 'No. They say 'negotiate,' meaning 'meeting their demands' - for example, not joining European organizations, NATO or any other military alliances and giving away territories.'

He argued that Russia, losing on the battlefield, has resorted to attacks on the Ukrainian population to compel the leaders in Kyiv to comply with its demands.

'There cannot be a negotiation process that says: 'Yes, you [Ukraine] win the war. Stop, give away the territory, and de facto capitulate to the Russian Federation,' Podolyak said.

He said negotiations can begin once Ukrainian territorial integrity is restored and Russia returns to the framework of international law. Such talks, he suggested, can focus on issues such as prosecuting war crimes and providing compensation for damages.

Media reports have suggested that some U.S. government officials would like to see Kyiv take advantage of its battlefield successes by moving to early negotiations. But Ambassador William Taylor, vice president for Russia and Europe at the U.S. Institute of Peace, said the position outlined by Sullivan is the official stance of the administration.

'Jake Sullivan, the national security adviser, spoke for the president and the entire administration,' said Taylor, who served as charge d'affaires at the U.S. Embassy in Kyiv in 2019. 'It is in the U.S. national interest for Ukraine to win this war and for Russia to lose.'

Most experts who spoke to VOA believe that a cease-fire at this time would benefit the Kremlin and would not end the war.

Any negotiated cease-fire would allow Russian forces to regroup and rebuild, said Nataliya Bugayova, Russia fellow at the Institute for the Study of War.

In Newly Liberated Kherson, Ukrainians Celebrate but Worry About What's Next

'Ukraine has momentum on the ground. A cease-fire would freeze the front lines in the best possible configuration that Putin can hope for in this war. It is one of the few ways for Russia to break the momentum of Ukrainian forces,' she said in a written response to VOA.

David Kramer, executive director of the George W. Bush Institute, believes that Ukraine can prevail on the battlefield and that the only way to end the war is for Ukraine's allies to help it to win.

'Nobody wants this war to end more than Ukrainians, who are fighting and dying to defend their country and freedom, but they have been remarkably successful so far and think they can prevail. Calling for negotiations now undercuts their momentum,' Kramer said in a written response to VOA.

Taylor said that any cease-fire reached while the Ukrainian military is succeeding in pushing the Russian forces out of the country 'would allow the Russians to keep what they now illegally occupy.'

This would put the Russians in an advantageous position for future attacks, said Bugayova.

'Any Russian foothold, especially in the critically strategic south, would constitute a permanent threat to Ukrainian sovereignty because Putin's maximalist goal of controlling Ukraine has not changed and will most likely outlast Putin - by design. The Kremlin will use any cease-fire to adjust, not scale back, its effort to establish control over Ukraine.'

A contrary view was expressed by columnist Katrina vanden Heuvel in an opinion piece for The Washington Post. She argued that it's time for the U.S. to start setting conditions for a diplomatic solution to the war because of the growing costs for the warring parties, the U.S. and the other countries supporting Ukraine.

'The stakes are too high for us to sit idly by as the catastrophe spreads and the costs - and the risks - keep growing,' she wrote.

The administration of U.S. President Joe Biden received congressional approval for $40 billion in aid for Ukraine for 2022; more than $19 billion has been spent on military defense since February 24.

Economist Timothy Ash acknowledged in an article for the Center for European Policy Analysis that assistance to Ukraine already represents 5.6% of total U.S. defense spending. But, he wrote,

'Russia is a primary adversary of the U.S., a top tier rival not too far behind China, its number one strategic challenger.'

No-go for any territorial concessions

Kramer said he worries that talk about the need for Ukraine to make concessions will be 'deeply demoralizing to the incredibly brave Ukrainian forces fighting for their freedom.' He pointed out that most Ukrainians oppose any territorial concessions in exchange for a cease-fire.

According to the poll done by the Kyiv International Institute of Sociology in September, 87% of Ukrainians were not ready to support any territorial concessions for the sake of ending the war with Russia as soon as possible.

Bugayova added that an early cease-fire would leave those Ukrainians still living in the occupied territories subject 'to continued Russian atrocities.'

U.S. Ambassador-at-Large for Global Criminal Justice Beth Van Schaack pointed out that that nongovernmental organizations, the media and war crimes investigators have already collected extensive evidence of such atrocities.

'This includes everything from bombardments of the civilian infrastructure to interpersonal violence where there are individuals who seem to have been killed execution style, or their bodies show signs of torture.'

She added that there have been 'credible reports of women and girls and even men and boys being subjected to sexual violence when they're in the custody of Russia's forces.'

Taylor said he believes Kyiv should consider talking to Moscow, but only after Russian troops have left Ukrainian territory. The ambassador said the territory itself should not be the subject of negotiations.

'The topics should include the total withdrawal of Russian forces from Ukraine; the return of prisoners of war and other Ukrainians, including Ukrainian children, held in or forced into Russia; reparations for war damage; accountability for war crimes and atrocities; and security guarantees for Ukraine,' Taylor said in a written response to VOA.

Kramer agrees but said he can find few topics for discussion with the current government in Moscow.

'It is hard to see what there is to negotiate with a regime in Moscow guilty of war crimes, crimes against humanity, and genocide,' he said in a written response.

'President Zelenskyy has outlined an ambitious peace plan that is unlikely to be accepted - or even considered - by the Russian Federation. Ukraine's recent military successes make it even less likely that Zelenskyy would compromise on any of his demands,' he said to VOA.

He believes the Russians are also unlikely to admit to and compensate for the pain they inflicted on Ukraine.

'Indeed, there can be no peace until Russia confronts its human rights violations in Ukraine and pays considerable reparations for the damage that it has inflicted. Such a concession remains far off,' Pomerantz said in a written response.

At the same time, as Biden administration officials say repeatedly, the war could end at any moment if Putin decides to end it.

Oleksii Kovalenko, VOA Ukrainian, contributed to this report. Some information came from The Washington Post, CEPA, Kommersant.Ru, Ukrinform and Interfax.Ru.