How Bills players are giving back for Thanksgiving 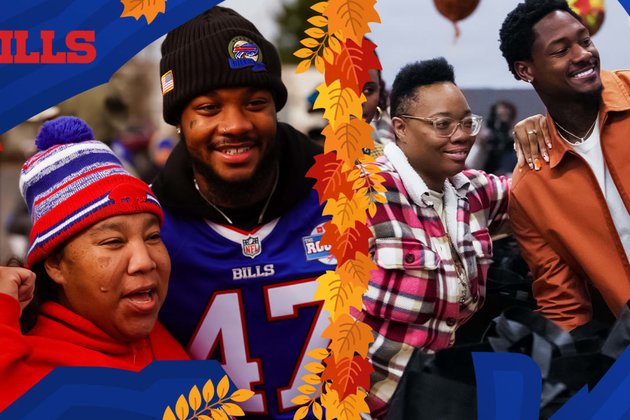 Just days before the Buffalo community rallied together to support the Bills through a Buffalo snowstorm by ensuring the players could make it out of their driveways and to the airport for the Bills-Browns game, it was the players giving back to their beloved community ahead of Thanksgiving.

A community that supports their hometown team through everything and anything, and one that the Bills hold near and dear to their hearts - especially when the holidays roll around.

Making an impact and giving back to the community is important to WR Stefon Diggs, who hosted a turkey giveaway for over 600 families last Tuesday at the William-Emslie YMCA on Buffalo's East Side. After a tragedy struck this neighborhood back in May, Diggs felt this is where his help was needed the most.

"All I can do is try to help," Diggs said. "Giving back is the main thing. So this holiday season, ease the stress a little bit for families and make it seem a little bit easier. Things are hard, times are hard, especially in this community."

It's a tradition for Diggs to give back around one of his favorite holidays which falls right around his birthday (Nov. 29). With the help of Imagine Staffing, they connected with Danielle Roberts, the Executive Director of the William-Emslie YMCA, to put the turkey drive together. Roberts and the YMCA were ecstatic when they heard that Diggs wanted to make sure that this specific community had turkeys and enough food to celebrate Thanksgiving.

"We've been through so much trauma, and our kids and our community don't usually get celebrities coming into their community center," Roberts said. "The holidays are a hard time for people, especially those who have lost loved ones and with financial hardship right now, so this was a great partnership to put this event on."

Buffalo native Pamela Gant was beyond appreciative of Diggs' generosity which will go a long way for her friends and her family when they sit down for Thanksgiving dinner. And as a dedicated Bills fan, Gant said having Diggs pay a visit to the YMCA made the event extra special.

"This is what the community is like, it's amazing," Gant said. "They've been working on this community and it's getting better. As long as we still have people like Diggs help, it will prosper."

Outside of providing families with essentials for a Thanksgiving dinner, Diggs interacted with a handful of kids in hopes of impacting their life in a positive way. As someone who looked up to athletes growing up, he wanted to spark that same inspiration in these young kids.

Danielle described this event as one that lifted the spirits of the people of East Buffalo, especially for the kids who look up to Diggs on and off the field. And to express their gratitude, they made hand-written thank you cards for the wide receiver.

"I think kids need to see role models that look like them, and that say they can do it," Roberts said. "They can aspire to be anything they want to be. Having an athlete who's at the top of their game, like Diggs coming right here in the heart of the city to kids who are underprivileged or who may be in single-parent homes, means a lot. It speaks volumes and shows that he has a heart, that he cares about the city of Buffalo."

As part of the Toyota Rookie Club, Bills rookies also got in on the fun last Tuesday during the annual Thanksgiving Blitz. The rookies, Bills staff, former players, and other members of the Bills organization lent helping hands at FeedMore WNY to ensure families received wholesome Thanksgiving meals.

This heartwarming event sent families home with totes packed with turkeys, apples, pies, stuffing, potatoes, and everything they need for a complete Thanksgiving dinner. Rookie WR Khalil Shakir didn't stop smiling since he loaded up the first car of the day with the Thanksgiving essentials.

"Obviously, they see us on game days with our jerseys on, and on social media and they kind of can connect with us through that," Shakir said. "But It's good to get out here and connect with them in person and see them and communicate with them. And in this instance, helping put smiles on their face."

Thanksgiving Blitz makes it possible for families not to worry about where they're going to get their holiday meal from and instead, they can focus on making memories and enjoying one another's company.

Catherine Shick, PR Manager at FeedMore WNY, has seen first-hand the amount of people struggling to put food on their table on any given day. So, for families who might be facing a lot of stress in terms of the rising cost of living and food insecurity that they have to face each and every day, the Blitz allowed them to forget about that for a moment.

"They have the relief of knowing that they're going home with a wonderful holiday meal and get to meet some of these people that they get to see and watch play football and represent our community," Shick said. "It's a really festive atmosphere and we're just so grateful for the continued support of the Buffalo Bills for making this happen year after year."

Another popular face in the Bills community made an appearance at Tuesday's event and instantly brought a smile to the older generation of Bills fans. Former RB Thurman Thomas loves coming out for this event and being reunited with Bills Mafia.

"I know how much these Bills fans love seeing the older players," Thomas said. "A lot of people that come out here are kind of my age and it's great to see them. It's the holidays, this is what we love to do, and this is what Buffalo is all about."

The Bills will be celebrating Thanksgiving early in Detroit when they face the Lions on Thursday, so 10 other Bills players made sure to celebrate the holiday early with various Buffalo communities.

LB Tremaine Edmunds hosted his annual Thanksgiving Dinner at the Salvation Army for clients from the Family Shelter as well as children from Youth Programming. Fellow linebackers Tyler Matakevich, Tyrel Dodson, Baylon Spector, Matt Milano, and Terrel Bernard showed up to support Edmunds and his efforts to help the community.

"I just want people to come, feel comfortable, and get a good meal because you never know what people are going through," Edmunds said. "Some may take for granted, sitting down and eating dinner. So just being able to provide that and see people's faces, it means a lot to me. It puts a smile on my face because you can't fake a reaction and to see it live, it really means a lot."

The Bills' Day of giving continued for S Jordan Poyer, who partnered with ECMC to provide Thanksgiving dinner to 210 dialysis patients at ECMC. When Poyer heard this was the plan for the holiday, he was all ears as giving back to the community is something the safety takes pride in. Dodson and Cam Lewis joined Poyer to spread love to the patients who might not be able to spend time with their families for the holiday.

"A lot of them don't get to see their families over these holidays, so I was just trying to give back and use my platform that I built to be able to give back," Poyer said. "It really means something to me. This game is one thing, I love this game of football. But it's also given me an opportunity to have that voice and have that platform to be able to go out in the community and do the things that I'm able to do."

S Jaquan Johnson hosted a Thanksgiving Impact event last Tuesday at the Northwest Community Center in Buffalo where he served 125 meals to members of the community. After dinner wrapped up, Johnson gave a motivational speech to the kids at the event to keep dreaming in hopes of being a spark to those who hope to be like him one day.

"After that speech, one kid came up to me and was like, he wants to be in the NFL, and with that speech, he believes he can do it," Johnson said. "So, I changed one kid's life that night, so it made me feel good."

And although the winter storm struck right around when OL Dion Dawkins was planning to hold his Thanksgiving event, he made sure the event still happened before the team left for their Thanksgiving Day game. In partnership with Wegmans and the Bills Foundation, Dawkins handed out Thanksgiving meals to preselected families by Peacemakers within the East Buffalo Community at the Lincoln Community Center on Monday night.